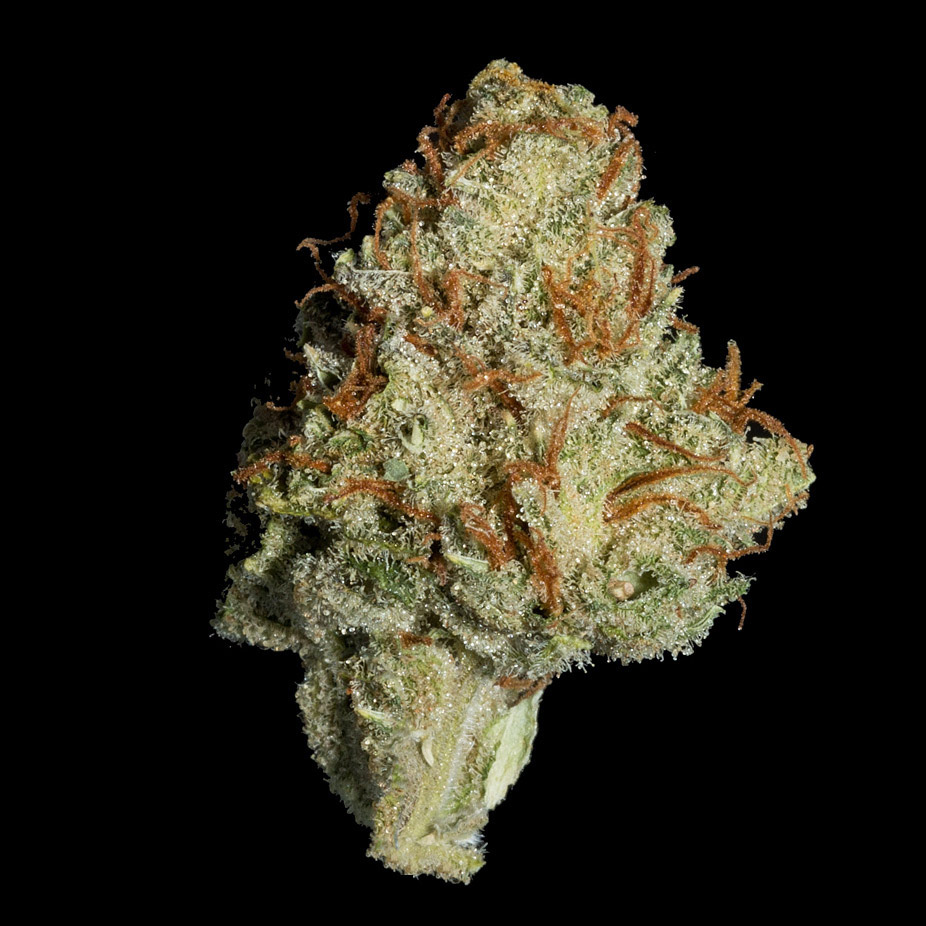 Notes:  .7 gram sample: Smells like skunk and pineapple… Smells like a great sativa, very light green with orange hairs. Tropical smelling with a hint of citrus or tropical fruits. Amazing tropical taste with calming sensations.. Hmm this might be a hybrid, I am not experiencing the uplifting energy high I was expecting. It had a nice balanced euphoric high, but also a centered calming uplifting / creative side, the duration seemed short. 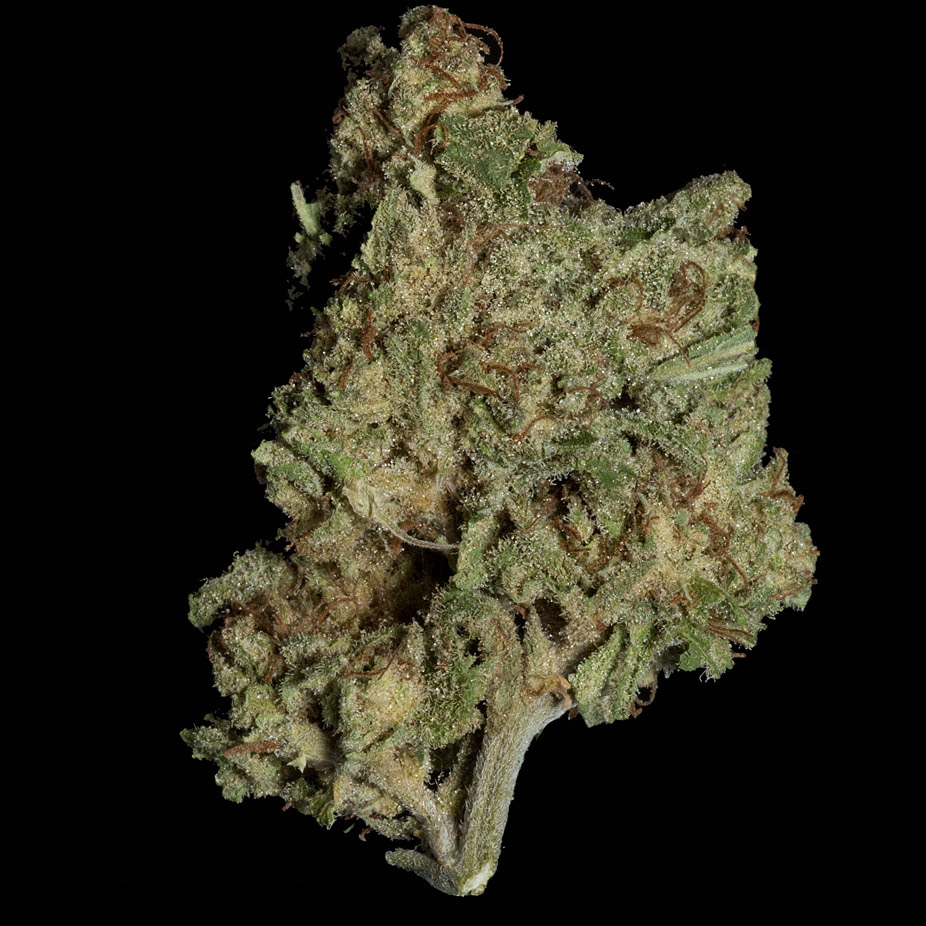 Notes: 1.2 Gram sample – Smells real clean, almost like a lavender or natural soap. Real tight trim job. Light green base loaded with trichomes make the bud look appear lighter.  It has a sweet smell, dank, a little fruity smelling. Real mellow taste. I found this to be a calming strain that reminded me of a lake or water… Seems strong with onset early effects, that seemed to increase. I like it, good high. It took a while to take effect but it feel very strong, medicated nicely! 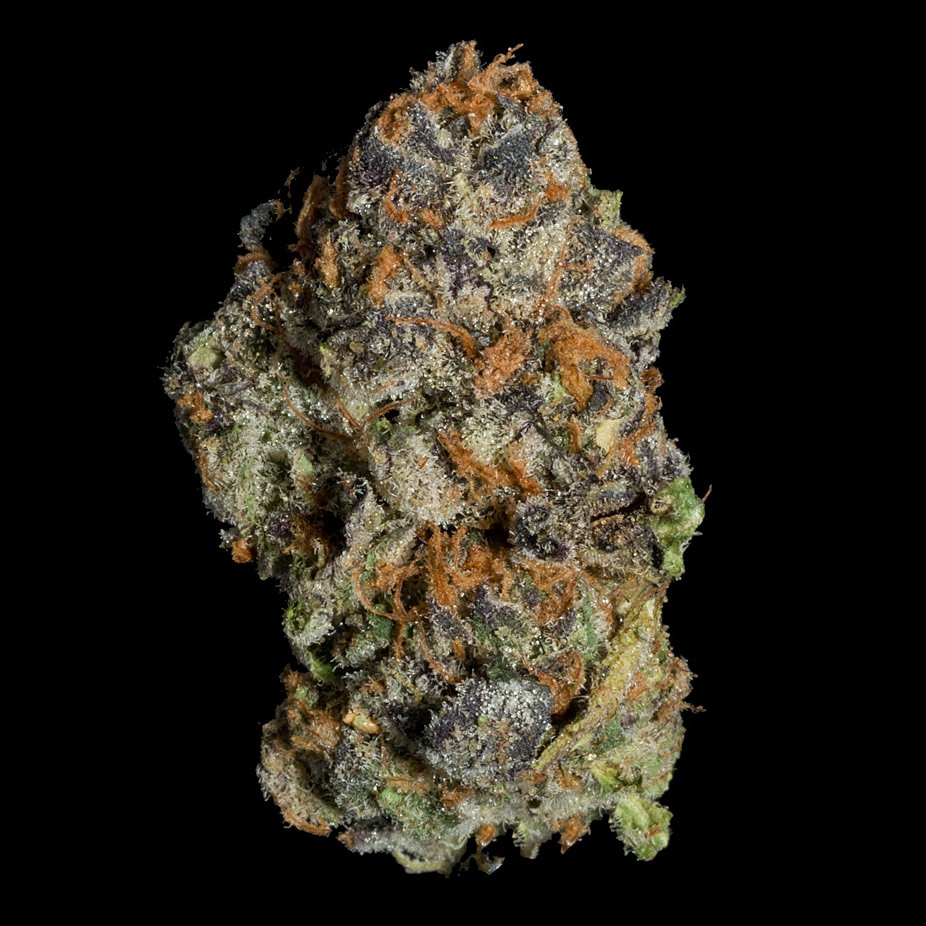 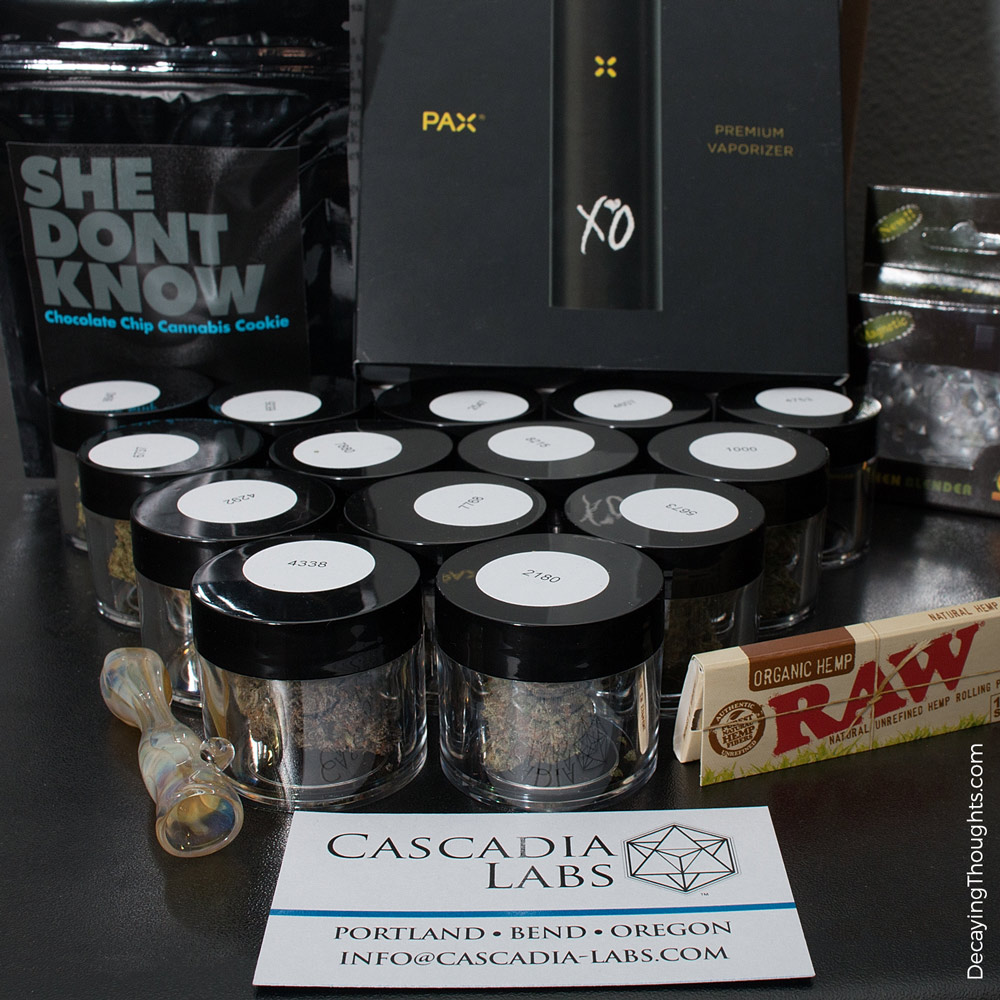 I am honored and excited to be selected as Cultivation Classic judge which is being held April 30th in Portland, Oregon presented by Farma , Willamette Week and Cascadia Labs – The Cultivation Classic is “Oregon’s only cannabis competition for soil-grown flower without synthetic pesticides, herbicides or mineral salt fertilizer”.

There where 99 entries submitted for the classic, a panel of 60 judges have been selected to blind test 14 strains within a 15 day test period. Judges consist of growers, brewers, chefs, bakers, artists, athletes, and industry professionals. It is suggested that each judge test one strain per day, at the same time.  I’ve decided I’m going to judge my daily strain each morning, before consuming anything else for the day.  That will help establish a consistent base.

Cultivation Classic Judges are asked to submit a score for the following:

I’ve received my kit with a Pax 2 included, so awesome!  Can’t wait to start tomorrow. I will be posting my judges with their 4 digit identifier in my blog, and will go back and update with strain names and cultivators after the competition. -RL 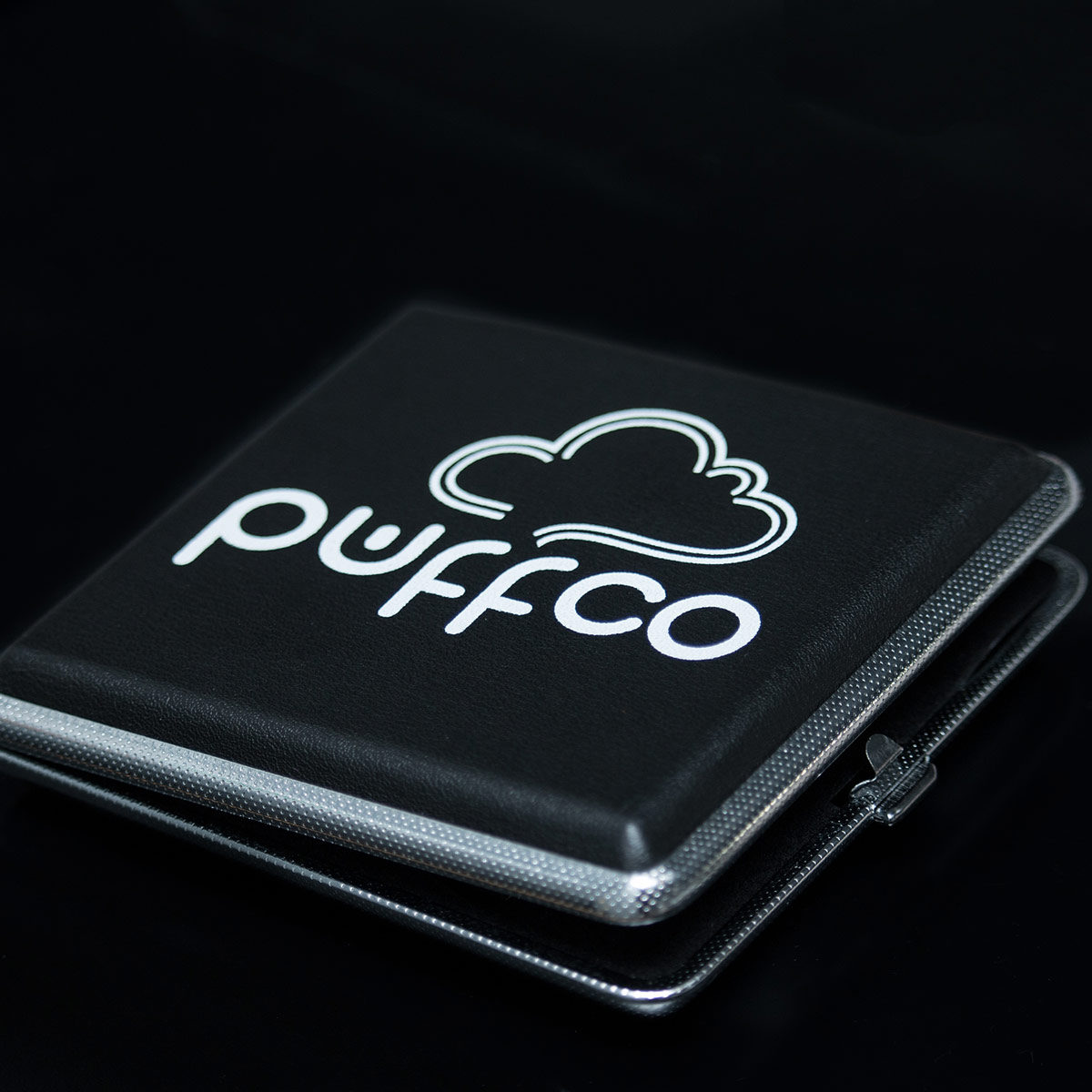 Puffco Pro Vaporizer – Review after serious testing for the past several weeks ?

I have been using the pen multiple times a day, and letting others try?

Exactly what is the Puffco? It is a vaporizer or vape pen that is specifically made for cannabis concentrates (dabs), not flower or bud.  Most vaporizer pens use inductive heating, heating an element to the point where the material will vaporize. Traditionally dabs are taken with an oil-rig. Rigs are usually water pipes that have a ‘nail’ that sticks up that is heated with a torch. Once the nail (bowl) is at the right temperature, you take a dab tool and ‘dab’ a piece of concentrated cannabis onto the hot portion and it vaporizes. Some rigs need domes, others are dome-less.  A vaporizer pen such as the Puffco, allows you the freedom to vaporize concentrates on the go, without the use of a torch.  The pen has a ceramic chamber that you load your concentrates into.

I really like the clamshell hard case the Puffco comes in, it’s sturdy and holds the pen as well as the USB charger.  The pen itself has a nice feel, it’s substantial in your hand. Not heavy, but surprising how solid it feels in your hand when you grip it. It weighs just under 2 oz.  The Puffco has a single button in the shape of a cloud, when pressed it lights up both button and the bottom of the pen. It’s surprisingly strong glow that can be used as flashlight dabbing into the night. It is also easy to cover the glowing with your hands if you want to conceal. There are three temperature settings which are displayed by the color glow; low, medium and high translates to; Green, Blue and Red.

Simply put, the Puffco is amazing. I’ve only used a rig literally twice since receiving my Puffco. I’m not a glob guy, but I use to frequently use preloaded vape pens on the go. The type that are mixed with glycol and fillers. Using a straight concentrate with no cut or e-juice trumps pre filled-pens when it comes to; effect, taste, and value.

One thing: What you put into it, is what you get out of it 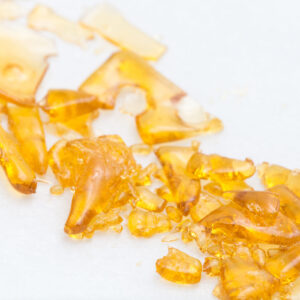 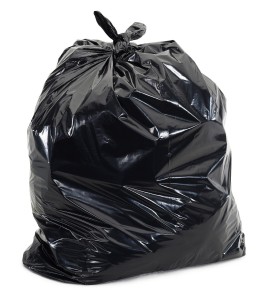 Let me explain, what I mean by what you put into it is essentially good in good out, bad in bad out. If you get top shelf concentrates, it will taste amazing and it lasts. On the contrary, if you put in some home-made or half-ass attempt at a concentrate – it’s going to taste like bad. If you start with a quality concentrate it’s a fantastic product, but if you have a dirty product, you will taste those impurities or toxins.

It’s primo until the bottom of the chamber, I’ve only gotten a reclaim taste on concentrates that were shit to begin with (see above Everclear Quick Wash Shatter). Those where the couple times I did try a rig again, to see if that concentrate would taste any better in a rig, and honestly it did, but it was harsh. I don’t want to smoke or vaporize garbage though, so this really isn’t an issue for me.  Garbage in garbage out, gold in gold out. No matter what, you will taste the flavors more for the good or bad.

The ceramic chamber is said to have the largest for concentrate pens on the market at least at the time of writing this. I found I could load between .3 and .5 grams in the chamber.  .5 is pushing it though.  So what does that mean?  Well, at least for me it means I only have to load the pen no more than once a day, and that was with hitting it heavy and sharing. I’ve read elsewhere online that you get about 75 hits off a full chamber, I’ve never counted but I’d say that sounds about right. The strongest hits will always be right after is loaded, when it gets down near the end it keeps going forever but the hits are comparable to other pre-filled cartridges I’ve tried. You can load up and easily make it through a weekend trip, if you’re not going to be vaping all day.  The battery lasts me personally 3.5 days of moderately heavy use.  I’m not sure how long it can go, I’ve only had it die on me once or twice, which was generally due to me not locking it and it going off in my pocket.  See tips below.

I highly recommend this vape pen, at its approximate $80 price tag this thing helps you stay medicated in style, and conserve on your concentrates. It’s 100% metal construction and finish on the loading chamber make this thing really slick, and easy to clean.  It’s not advertised as waterproof, but I live in Portland, Oregon and mine has lasted a sessions out in the elements without issue to say the least.  If you’re on the fence let me help- go get one.  Solid company and product, they have a great support department.  I actually contacted their support team before I got my Puffco, I had questions and they where more than happy to provide answers. Excellent product and company!

Music Monday Kid Cudi – Just What I am 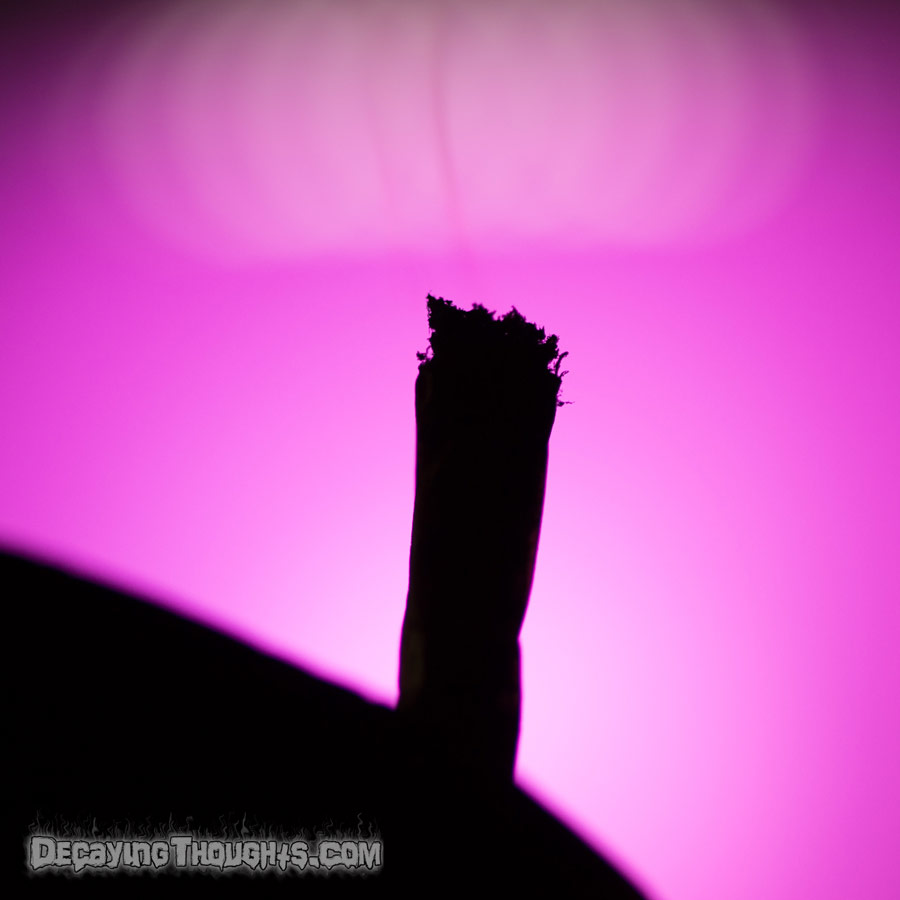 Listen to the whole song: Here

Beer and Cannabis are Favorite Cousins

With their terpene profiles often complimenting if not matching cannabis and craft beer go hand in hand.  Hops are actually in the same family as cannabis, and I personally have a love for both plants.  During the boil where hops are added at specific times, the aroma is amazing, if you match an equally tasty concentrate in the Puffco the experience is really top notch.

Check out my review of the Puffco- Here 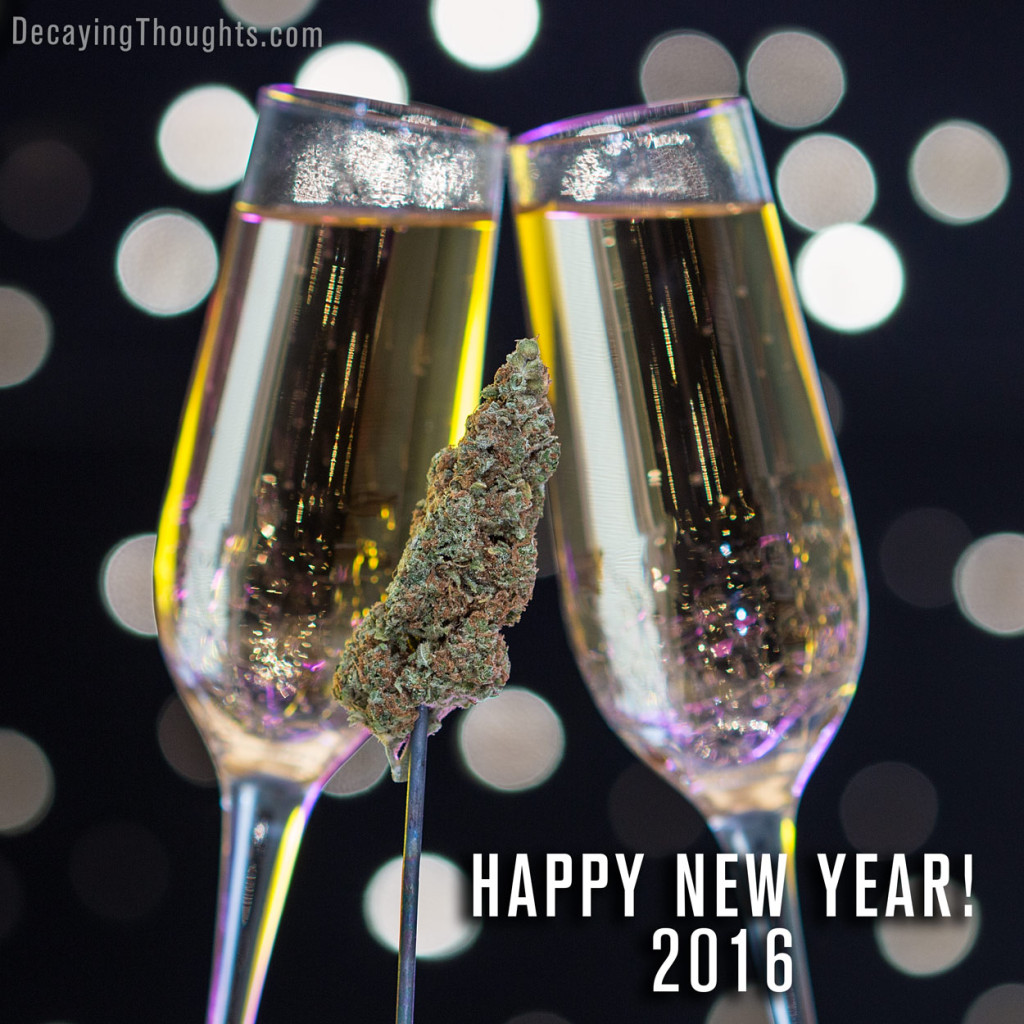 Best wishes in the New Year 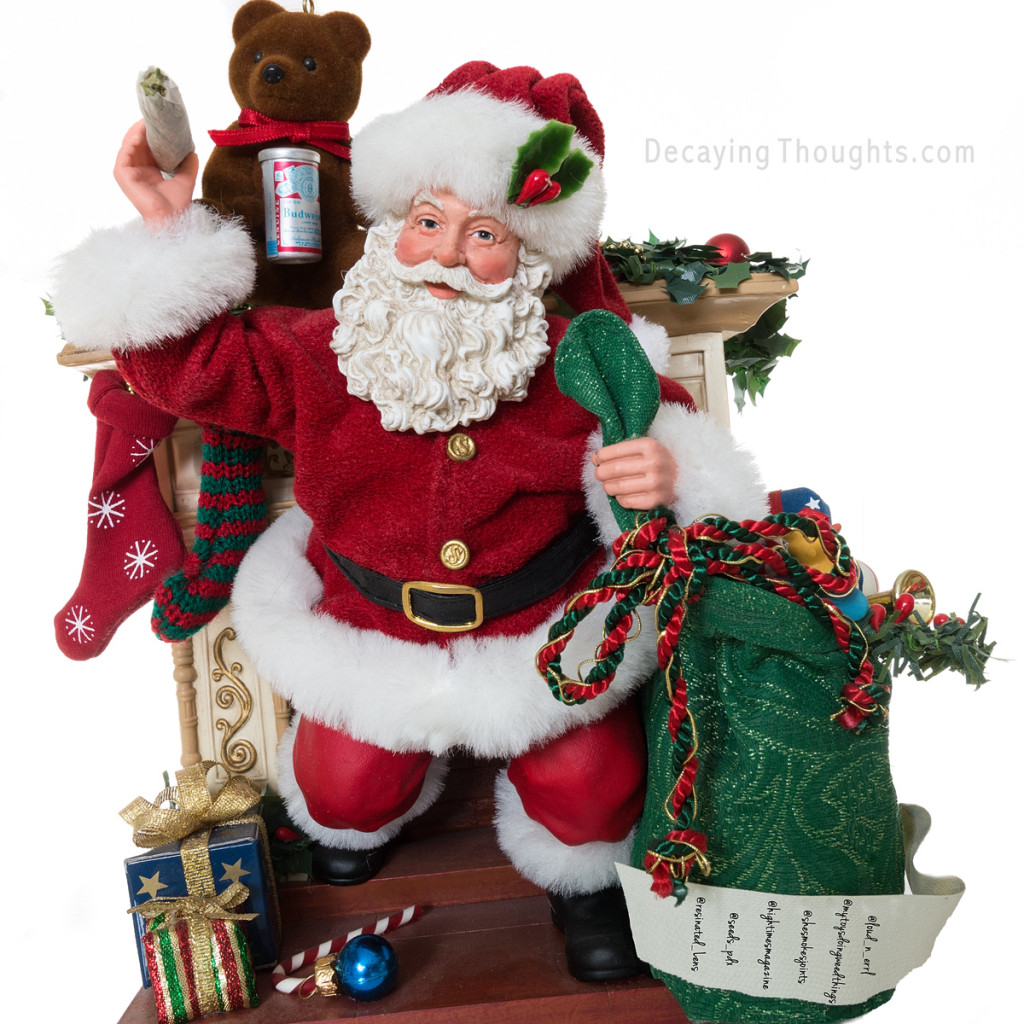 I asked Santa to bring bud, he laughed and said he knows it’s sh*tty beer but he’s gotta stay hydrated when he works!

Thanks for checking out this series of 12 days of Santa + Cannabis, you probably didn’t know he was such a party guy! If you happened to miss the other 11 posts, check them out!  Please reach out if you have any interest in carrying greeting cards, posters, or other creative Cannabis material for your dispensary or shop.  Thanks!

Even Santa can use a little help 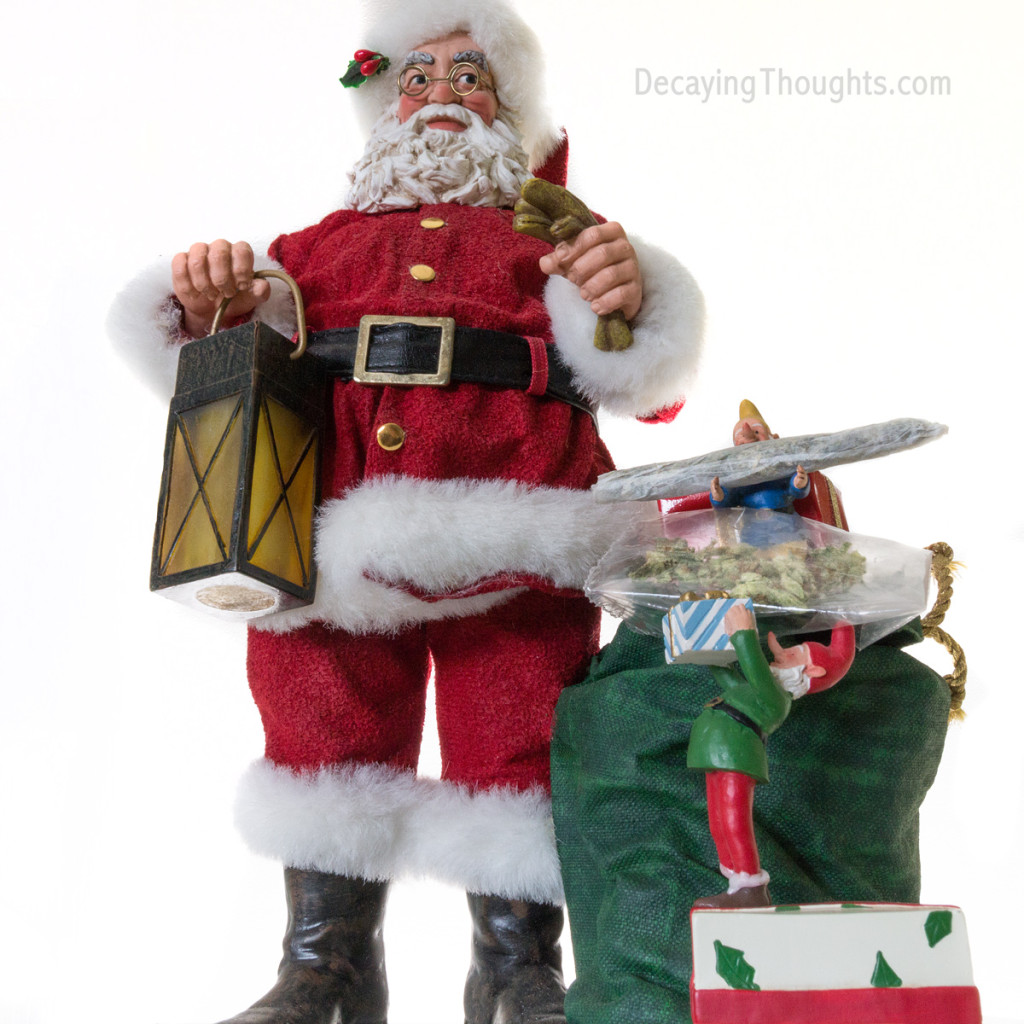 He’s all loaded up and ready to roll out!

Sometimes you just have use what’s lying around the workshop! 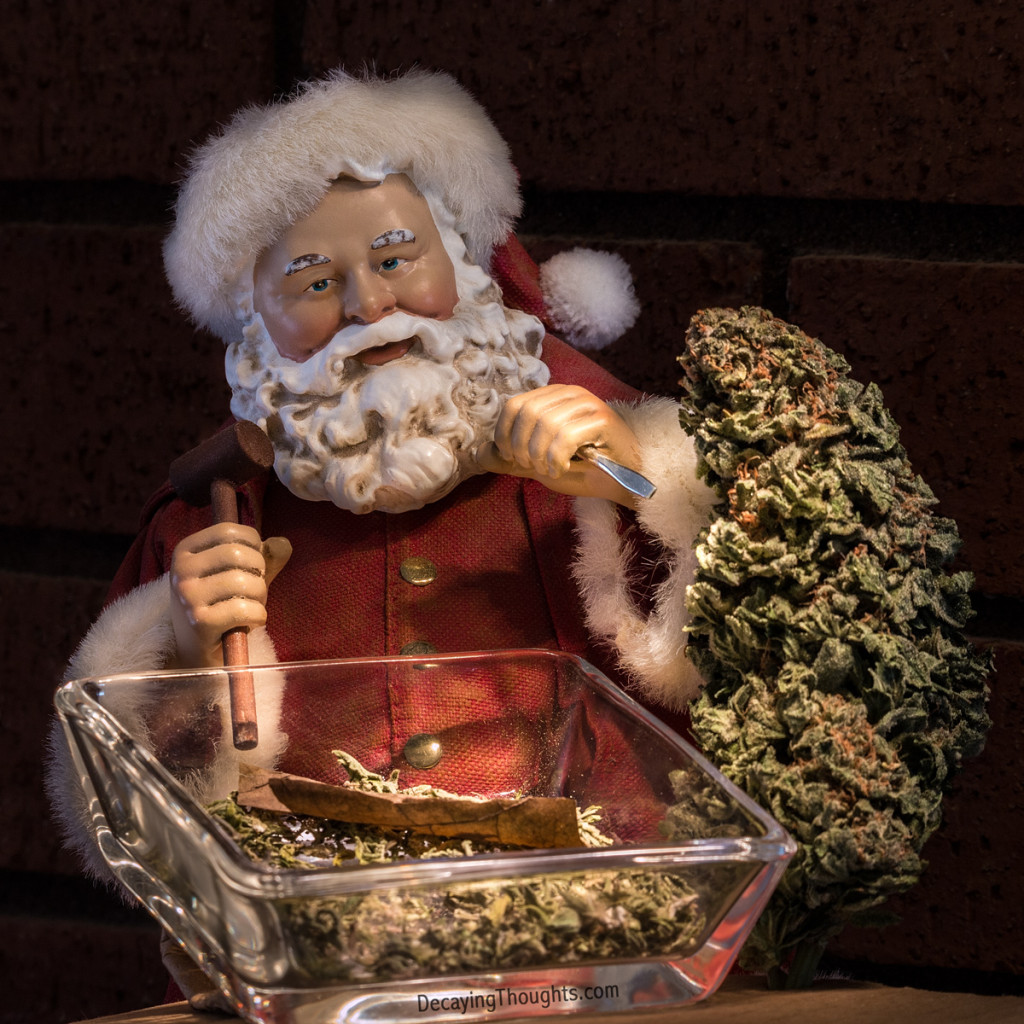 I always knew Santa was a blunt guy!

Santa can’t keep his hands off anything that has the word “cookies” ? on it‼️

Sorry Santa! ? it was an old container?, I’ll get you some Girl Scout Cookies next time! 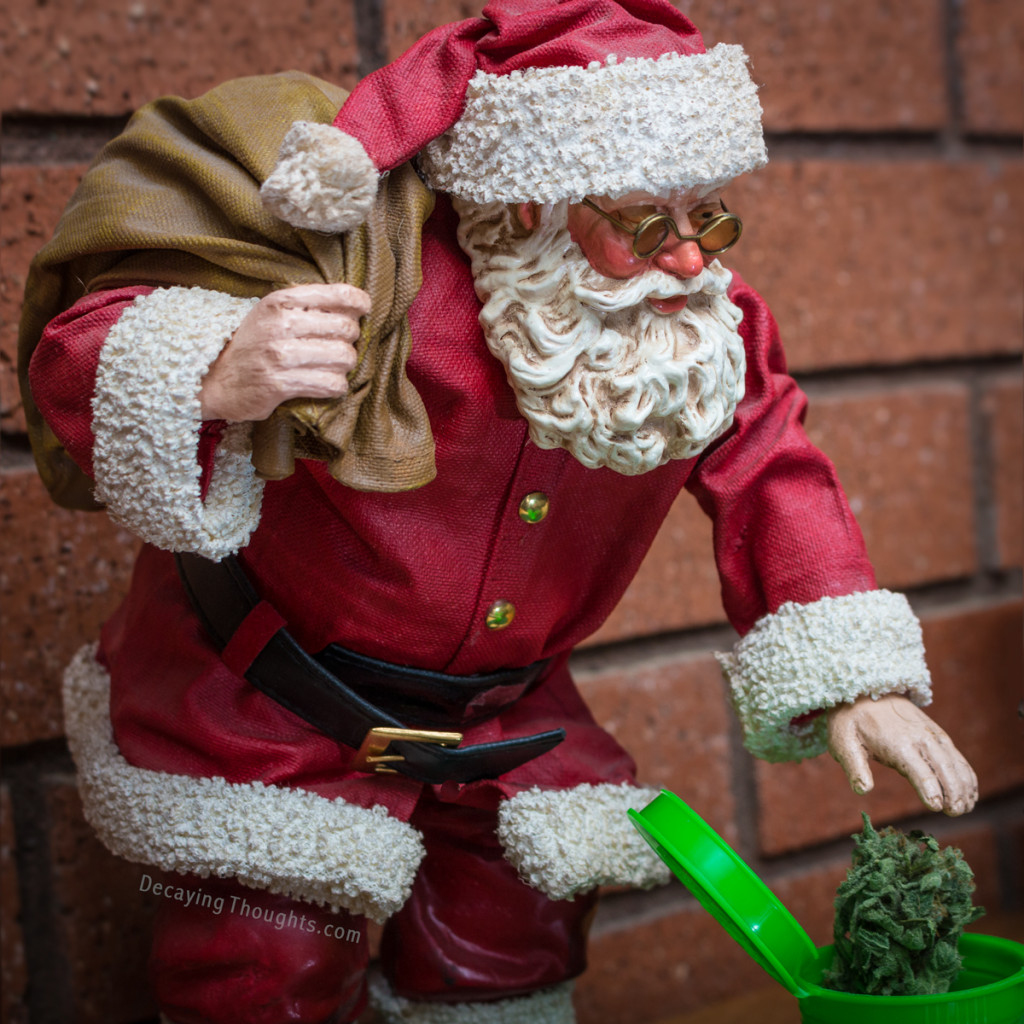